SRHvsKKR, match 35 in the Dream 11 IPL 2020. betway sports is here with the odds on the game between Sunrisers Hyderabad vs Kolkata Knight Riders, the bookie has been one of best among the Cricket betting sites in India. The SRHvsKKR is the first match on Sunday and it will be followed by MIvsKXIP match where Rohit Sharma will take on Kl Rahul, for match 35 its a battle between David Warner vs Eoin Morgan, both skippers follow same tactics. They let their players do what they feel at that moment, simply follow heart is their mantra. 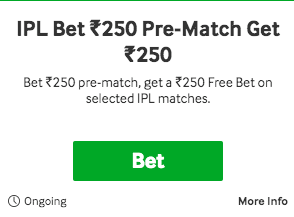 The IPL odds are brought by the betway bookie, you can even play with the betway app for the upcoming game on Sunday at 15:30 IST. Compare this betway app in our cricket betting apps in India page to verify if other bookies are faring as much as this bookie app. Coming to the SRHvsKKR game, both teams are in a battle for their spot in the points table. After 9 matches both teams are almost at the same place and coincidentally with the same problem.

KKR recently got Eoin Morgan as their leader after Dinesh Karthik Stepped down to focus on batting and so the world cup winning England Captain took the responsibilities on his shoulders. David Warner has already seen this ups and downs with SRH and has been instrumental in SRH success but this time he is without his key player Bhuvneshwar Kumar and so he is checking on alternatives, T Natarajan is a good find.

KKR though leads the head to head stats against SRH, this time on 18.10.2020 the team outlook and the momentum is in favor of the SRH. SRH just needs to bring in Abdul Samad and Abhishek Sharma thats it, they are very good. They should experiment less and stick to their side and balance their chances against odds. David Warner has been all over the place with his Captaincy Decisions, when Abdul Samad has been providing a good outcomes they changed him with Vijay Shankar.

The lack of Bhuvneshwar Kumar is visible but Sandeep Sharma has been consistent and covering it up for Bhuvneshwar loss. Rashid Khan has to step up and deliver some match winning performances, it’s the right time for players sort of his caliber to perform. Mohammed Nabi and Rashid Khan duo can make wonders because the pitch has been slowing up. SRH could go in with 3 quality spinners and one part time spinner along with Sandeep Sharma, T Natarajan. our SRH team prediction would be: David Warner, J Bairstow, Rashid Khan, Mohammed Nabi, T Natarajan, Sandeep Sharma, Abdul Samad, Manish Pandey, Priyam Garg, Abhishek Sharma, Khaleel Ahmed.

KKR chances for the play offs are alive still and their Captain Eoin Morgan would want to prove his Captaincy skills and lead the side to playoffs. KKR has to take some chances and get off the radar with Andre Russells, he is injury prone and also lacking his ability in batting this season. They should try with Chris green for couple of matches, he is very good in the recently concluded BBL. KKR has to take in chances with Chris Green in place of Andre Russell and Lockie Ferguson in place of Pat Cummins. Dinesh Karthik was brilliant with bat and KKR would like some scintillating performances from Eoin Morgan, Tom Banton and Dinesh Karthik. Shubman Gill has been impressive with his consistent performances he surely has a long way to go.

NextCSK vs DC IPL ekbet odds 17.10.2020
PreviousMIvsKKR Match 32 IPL betting odds 16.10.2020
We use cookies to ensure that we give you the best experience on our website. If you continue to use this site we will assume that you are happy with it.Ok